What is packet switching?

Packet switching is a networking communication method used in telecommunications systems, whereby data is grouped into blocks called packets and routed through a network using a destination address contained within each packet.

By breaking the communication information down into packets, it allows the same path to be shared among many users in a network. It also means that each packet can take a different route to its destination. This form of connection (between sender and receiver) is known as connectionless (as opposed to dedicated). Regular voice telephone networks are often circuit-switched rather than packet switched; whereby for the duration of the call connection, all the resources on that circuit are unavailable to other users.

An individual packet is a unit of data which is routed between an origin and a destination via the internet or another packet-switched network.

If a file such as an email, GIF or HTML file is sent via packet-based transmission, the TCP (Transmission Control Protocol) layer of the TCP/IP will divide the file into chunks that are optimised sizes for routing. Each chunk is known as a packet and is separately numbered and carried along with a destination address. The packets may then travel on different routes to the destination, but when they all arrive, they are reassembled into the original format (by the TCP layer at the receiving end). 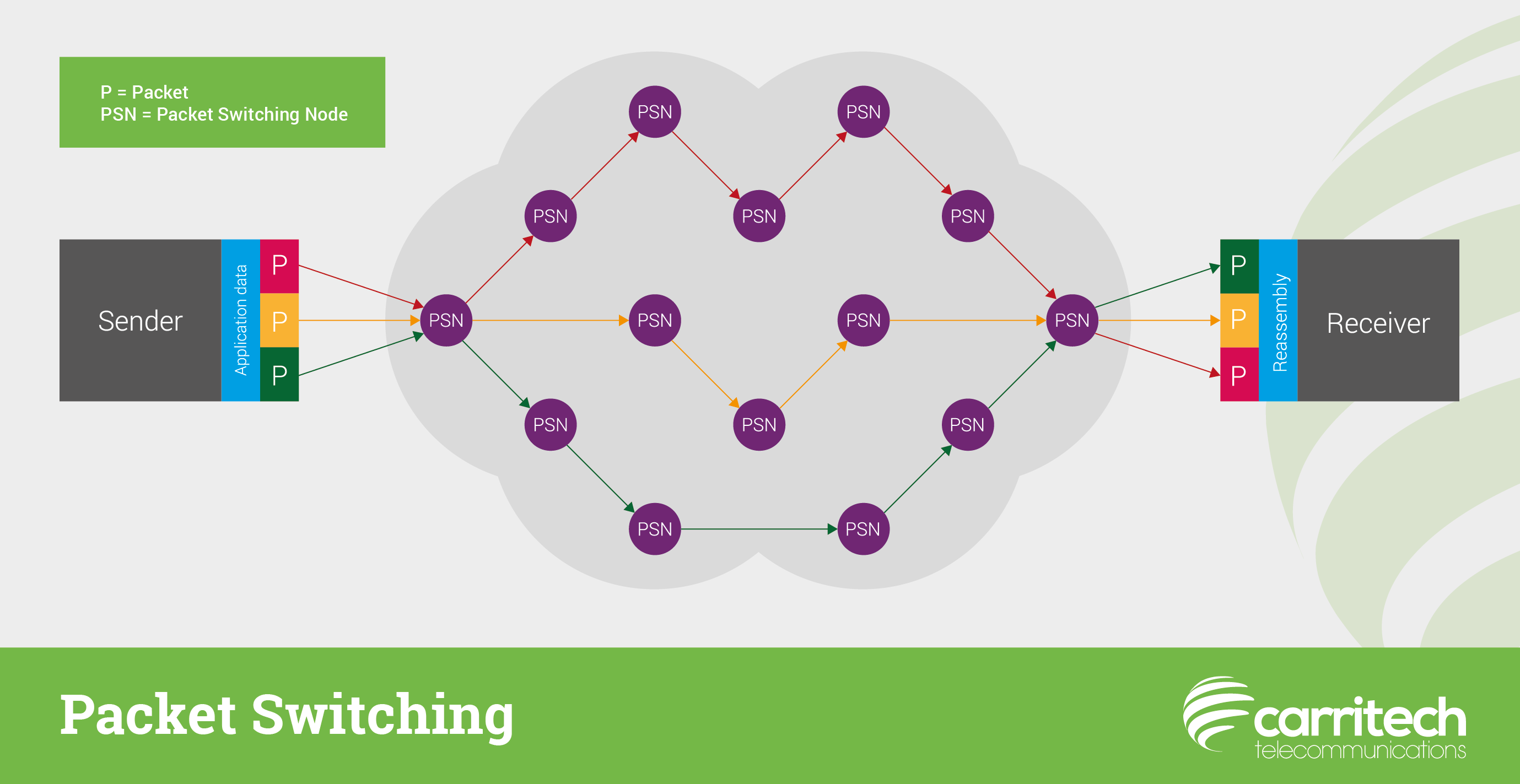 All packets have a basic architecture or a header, payload and footer but depending on the protocol being used they may also contain some further information, such as that listed below:

In order to route a packet over a network, the packet must contain two network addresses, the first being the source address of the host (sender) and the second being the destination address of the receiving host (receiver).

Packets contain checksum, parity bits or cyclic redundancy checks. These each detect errors that may occur during transmission.

A preliminary calculation is performed before the packet is sent, at the transmitter. Once the packet is received, the checksum is recalculated and compared with the first calculation that is contained in the packet. If any discrepancies are noticed the packet can be corrected or discarded. Any discarded information is known as packet loss and will be dealt with by the network protocol.

When a packet is faulty, they can end-up traversing a closed-circuit. If nothing was done about this, it could eventually build up, ultimately congesting the network until the point of failure. To tackle this, a ‘time to live’ field is added to the packet. The value of this field is decreased by one each time the packet passes through a network node. If the field reaches zero, routing has failed to successfully transmit the data and the packet will be discarded.

Some packets will contain a field that identifies the overall packet length. In some network types however, the length is implied by the duration of the transmission and so this is information is deemed unnecessary and is omitted.

When a network implements QoS (Quality of Service), it gives priority to certain types of packets over others. The priority field is used to identify which packet queue should be used. A high priority queue is emptied more quickly then a lower priority queue at points in the network where congestion is occurring.

The payload is fairly self-explanatory. It is the core data that is being carried on behalf of an application. It can vary in length but the network protocol as well as equipment used on route will usually set a maximum length. If necessary, some networks will break larger packets up into smaller packets if the payload is too large.

Carritech supply, purchase, repair & refurbish, and provide ongoing support for many telecommunication products which utilise packet switching methods. You can read more about the products we support here.

Next article: « Opinion: What can we expect from the telecommunications industry in 2019?

LAN vs WAN: What are the differences?

Why would carriers choose to buy used or refurbished telecoms equipment?