Rectifiers are used in a variety of devices and can be applied to modify network systems. They are categorised in different ways dependent on factors such as type of supply, bridge configuration and components used. On the whole, rectifiers can be classified into two types – single phase and three phase. Drilling down another level, they can then be separated into half wave, full wave and bridge rectifiers.

What is a Rectifier?

Before we get into the different types of rectifiers, it is worth going over what rectifiers are. A rectifier is a diode which converts alternating current (known as AC) to direct current (DC). DC only flows in one direction whereas AC regularly reverses direction. Rectifiers allow current to flow in a single direction.

Without the right rectifier, there is little chance of configuring your ideal system. They are the heart of a power system as they offer optimised solutions for each application. Using rectifiers means that you can tailor your power system without having to rebuild every element.

The Different Types of Rectifiers

So, it is clear that rectifiers are a key component to any network system but we need to dip deeper to understand the carious types. Depending on the situation, different rectifiers are used conditional to the system it is used in. The top two levels are single phase and three phase, which indicate how many diodes are used in the circuit. Then we come to half wave, full wave and bridge rectifiers, which affect what half cycles are produced. Let’s go into each type to better understand what rectifier should be used.

Comparing the two types of rectifiers, three phase is preferred when using large systems. This is because they can deliver large amounts of power and do not require any additional filter to reduce ripple factor. Because of this, three phase rectifiers are more efficient and have more transformer utilisation factor. 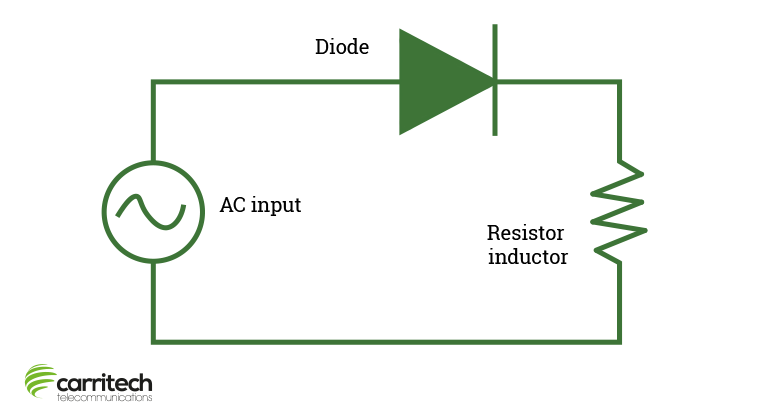 Full wave rectifiers convert both (positive and negative) half cycles on the AC input into pulsating DC output. As figure 2 (below) shows, these circuits use a center tapped transformer which is connected across the middle of the secondary winding of a transformer. These types of transformer divides input AC into two parts – positive and negative. Due to this, full wave rectifiers are considered much more effective as the ripple factor is much lower in comparison. Also, as both cycles are allowed at the same time, it means that no signal is wasted. 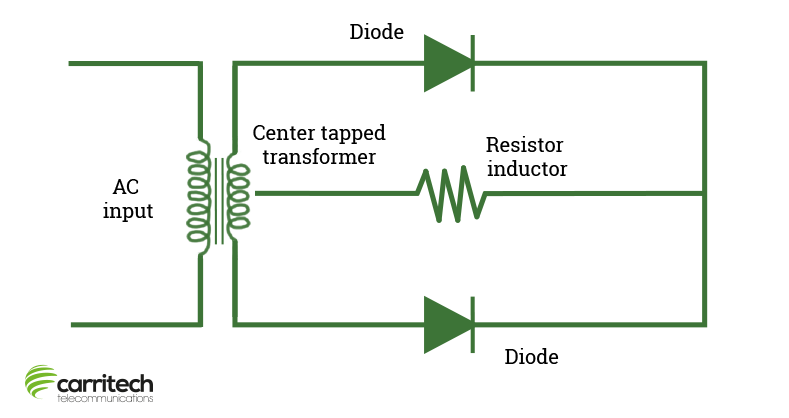 Bridge rectifiers are widely used in power supplies to supply direct current voltage to the components. They use four or more diodes and a load resistor (see figure 3 below). 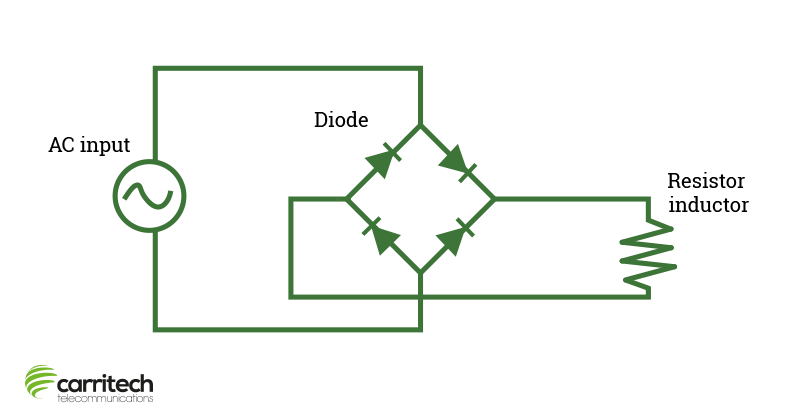 The four diodes are arranged in series with only two diodes allowing electric current during each half cycle. The diodes are considered to work in pairs, with one pair allowing electric current through the positive half cycle and the other half allowing current during the negative half cycle. The input alternating current is applied across two terminals and the output direct current is obtained across the resistor inductor which is connected between the other two terminals.

Bridge rectifiers allow electric current during both positive and negative half cycles of the input AC signal. These circuit configurations do not require center tapped transformers, which can be very expensive.

How Are Rectifiers Used in Telecommunications?

When it comes to the telecommunications industry, rectifiers are essential for building network systems. Their use means that you won’t have to start from scratch when things need changing. The different types of rectifiers allow telecommunication companies to switch the layout of systems with relative ease. They also allow telcos to tailor their systems to suit their needs as and when they need modifying.

Applications of rectifier products include fixed access network, wireless access network, transmission network and communication network of enterprise. Rectifiers can provide stable and reliable power for main suppliers and efficiently reduce power consumption. Because of this, every telecommunications company should take into consideration the different types of rectifiers before setting up or making alterations to their system.

At Carritech, we offer a wide range of rectifiers to suit your network needs. See here for the latest products we have acquired. Can’t find what you’re looking for? Contact the sales team to enquire today.

Next article: « Anatomy of a Fiber Optic Submarine Network

An Introduction to Network Slicing 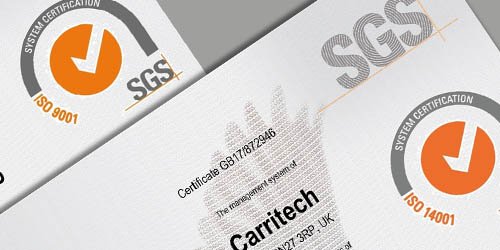